“One day the words darkened demise just came into my head. I didn’t know what the meaning was, but I thought it sounded cool, so I looked it up and demise has a few meanings, one which is a person’s death. With darkened at the beginning I thought the concept of death to a powerful corrupt leader would fit, and that mixed well with the war concept which has been the root of Beltfed Weapon.  I have enjoyed watching a lot of war documentaries, so this song is back to the root, and what Steve Tucker did with the vocals on this song, he absolutely crushes! I am very honored to have the opportunity to work with him, as well as everyone else on the Darkened Demise EP.” – Frank Hetzel

“Being involved with Beltfed Weapon has been a killer time with killer friends. The songs are heavy and still maintain a hook as well. I’m super proud of what we’ve done and I for one am looking forward to bringing the stuff to the live stage in the future” – Jason Viebrooks

“My good friend,  Jason Viebrooks, mentioned this project he was involved in,  Beltfed Weapon  and asked me if I would be interested in doing vocals on a couple songs.  After hearing the material and talking to Frank, I thought it sounded really good and I liked the idea of doing some vocals on this thrash project. Not only does the music sound great, it was a lot of fun doing something a bit different.” – Steve Tucker 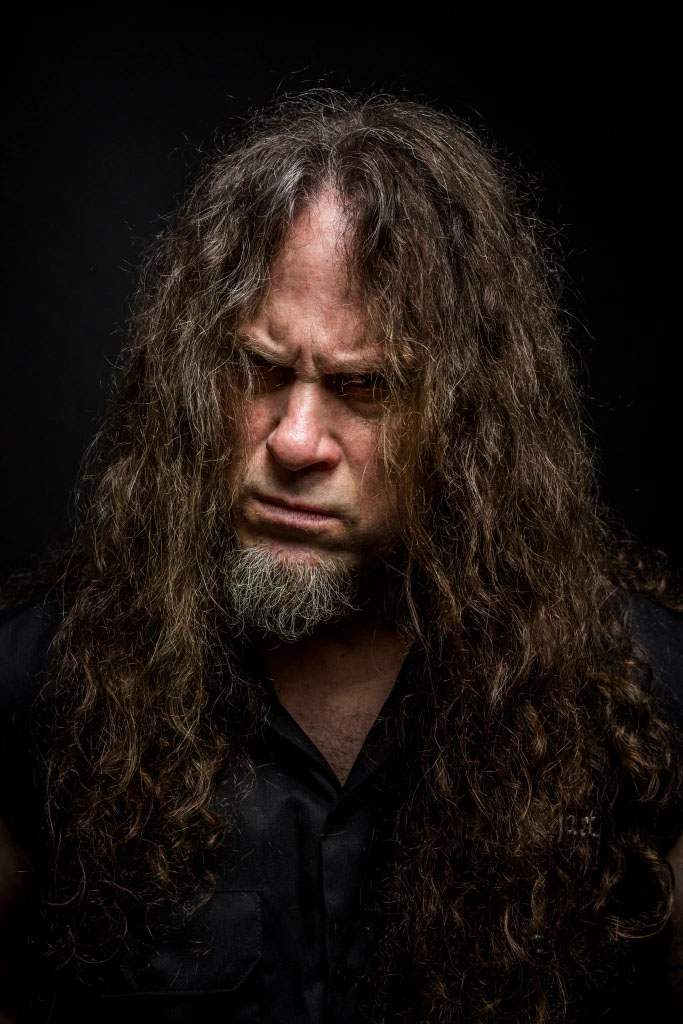 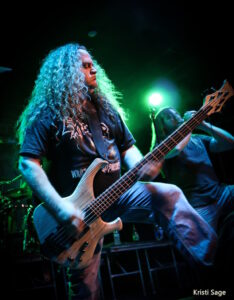 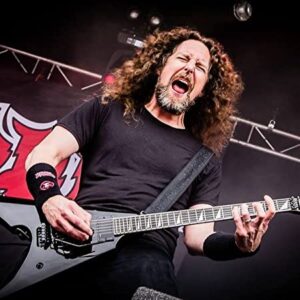 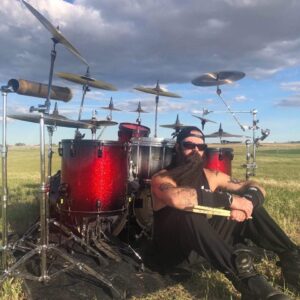 Beltfed Weapon hails from Seattle and was founded in 1999 by guitarist/songwriter Frank Hetzel.

For more than 20 years, Frank Hetzel has been a staple of the Seattle metal scene. He first established himself in the music business by booking national and international touring bands. On the side – at least at first – he was the guitarist and main songwriter for Beltfed Weapon, a Pacific Northwest band influenced by speed, thrash, and death metal.

Now, following five difficult years of interpersonal turmoil, external obstacles, and pandemic-induced complications, Beltfed Weapon have returned with their best, most ambitious, and most creative offering. Instead of writing, recording, and releasing a new batch of songs with the same musicians, Hetzel spent years writing five new songs and tracking them with an all-star lineup that includes members of Morbid Angel, Control Denied, Arch Enemy, Black Label Society, Testament, Into Eternity, and Heathen. And now that the new Beltfed Weapon songs are done, Hetzel plans to gradually release them – one every six to eight weeks – along with a series of explosive lyric videos.

After the new Beltfed Weapon songs are released – either as single tracks or vivid lyric videos – all five will be issued as the EP Darkened Demise. Hetzel wrote the title track as an apocalyptic thrash-death number that features Morbid Angel’s growling vocalist Steve Tucker (who also handles vocals on the fierce “Killing Machine”). While Aymar is the dominant voice on the EP (singing on “Headfirst into Hell,” “Eternal Fire” and “Accept Your Insanity”), Tucker offers a stark, compelling contrast to Aymar’s more tuneful approach.

Combining four or more styles of metal into a single batch of songs is no small accomplishment. And Darkened Demise is packed with abrupt tempo shifts, staggered rhythms, extended middle-eights, and other musical hairpin turns that keep the music exciting and unpredictable.

Hetzel came up with the title Darkened Demise off the top of his head and decided that the name sounded as “metal” as the song. It was only after he Googled the title that he learned that a “darkened demise” is the death of a corrupt, powerful leader, a definition that fit the vibe of the EP and the tone of the times. Plus, it feeds right into his interest in history, especially the history of war.

Since Beltfed Weapon is currently a supergroup of musicians in vastly different locations, Hetzel has no plans to embark on a lengthy tour. At this point, he wants to schedule a record release show when the EP comes out and maybe assorted concerts with various players on the album. Hetzel hopes that word-of-mouth will provide the bulk of awareness for Darkened Demise, the same way metal bands spread the word back in the days before major labels realized the music was marketable. As much as anything, Darkened Demise is a labor of love – a project Hetzel pursued by himself with a bunch of friends and guests he invited along for the ride.

Quotes from the Darkened Demise contributors:

Such great talent and great people and a great engineer, Juan Urtega. He’s so professional and so easy to work with. I plan to do more with him in the future.  I have pushed the envelope with Raining Plague (released 10/31/15) with Dean Sternberg and the new songs with Tim Aymar.  I like to incorporate the different styles of metal that I personally like into my music. – Frank Hetzel

Frank Hetzel has put together an incredible lineup of musicians for the Beltfed Weapon EP  Darkened Demise. When I heard the killer music and saw the list of talent involved in the project it was a no brainer for me to participate. Who wouldn’t want to do trade-off solos with Jeff Loomis on a couple of songs, right?! Metal fans should definitely check this out when it’s available! -Kragen Lum

“I first met Frank Hetzel in the early 2000’s through some mutual friends. I learned he was a Nevermore fan and also a guitarist, so we hit it off right away. I consider Frank to be one of my closest friends and someone I can always trust and count on. He’s a great dude and I’m very happy to have played some solos on his new EP. The longer solo in accept your insanity was something I obviously spent a lot of time on as it needed some kind of storyline to it. I quickly found myself working away at it on a cold rainy day in Seattle, which is always the most perfect vibe and time to write anything dark in our ever changing weather conditions. I think the final takes turned out killer and adds a cool flow to the song. Frank has come a long way with his writing and I’m super proud of him with all his efforts and great work ethic. For fans of Thrash and just good metal in general, I highly recommend giving this a spin. In the words of the late Chuck Schuldiner, “Keep the metal flowing” Frank, and I’m proud to call you a friend.” – Jeff Loomis

“Years ago I was searching on YouTube for projects Ronny Munroe former metal church vocalist was involved with then, and I found Beltfed Weapon’s P.O.W. and I was impressed. So I checked out more of their stuff. Somewhere along the line Guitarist Frank Hetzel friended me on Facebook and he contacted me about writing lyrics and singing on some of his stuff. I just loved the riffs he came up with. so it didn’t take long to get him my tracks. He didn’t mention it at first, but I secretly hoped it was for Beltfed Weapon, and my wish came true. I hope to do much more with Frank and the gang in the future.” – Tim Aymar

“When the world went nuts in 2019, I moved to the country and started farming to focus on sustainability. My guitar player Tim Roth from Into Eternity messaged me and said “Hey Newbs, my good buddy Frank Hetzel is looking for a drummer for his Death/Thrash band and I thought you would be a good fit.” I said “Ok sick I’ll check it out!” I met with Frank online and we clicked instantly, super easy going guy with a plethora of INSANE riffs! As soon as I heard the music I was hooked. Shortly after that I had my Engineer JB at Divergent Sounds Studios come to my farm and record me in my basement. Three hours later, we finished tracking drums for the brand new BELTFED WEAPON album! I am super stoked on these tracks and so thankful to be on a record with Frank, Jeff Loomis and JD DeServio to name a few! Get ready to have your ears blown away! WATCH IT GO!” – NEWBS

“After knowing Frank for many years, we finally sat down and wrote a song together and I’m stoked that it’s making it onto the new Beltfed Weapon EP. “Head first into hell” was lots of fun and pretty easy to put together. I admire Frank’s ability to assemble all the people, music and visual concept to drive his idea forward. The result is powerful and bone crushing metal and I’m honored to be a part of it.” – Dagna Barrera

“My buddy Andy Beech put Frank in touch with me! The tune is ripping! It’s my first thrash bass track I ever recorded and I dig it!! 🤘🏼” – JD DeServio

*If you are viewing this email with a Firefox web browser and cannot see any press release content, please try viewing in a different browser.