SEATTLE , WA – BELTFED WEAPON’s Frank Hetzel and RONNY MUNROE (Munroe’s Thunder, Metal Church, TSO) are not just friends with mutual desire to complete a quest to work together on a song. They have united and joined in the fight against cancer. Hetzel, upon hearing of Munroe’s wife and manager J. Von Hughes Munroe’s personal battle with stage 3 Mullerian Ovarian Cancer, wanted to help.

“P.O.W.” digital single will be released on February 10th, 2018 and will be available at CD Baby and iTunes.

“P.O.W. is a song I had written the music for about 5 years ago. I have wanted to work with Ronny Munroe for some time and remember talking about it with him quite a few years ago,” said Frank Hetzel. “Having Ronny sing on this song is a huge honor for me as he is one of my favorite vocalists and a good friend as well, so this is a win-win situation for everyone. I felt this song had his style written all over it and after he recorded his vocals I was very impressed. He put a lot of emotion into this song and it shows. I couldn’t be more happy with the results.” 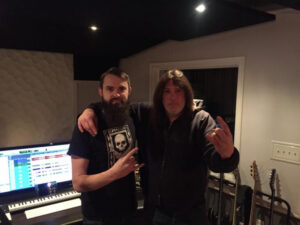 “Frank and I have wanted to work on a song for a few years and now we finally have,” states Ronny Munroe. “Frank is a great songwriter and friend, and I am stoked to be able to do this. The song is called P.O.W. and it’s a straight ahead Thrash metal song that delivers the goods. P.O.W. is written about one’s personal hell, whether it be a prisoner of war left to die in a cage like an animal or someone going through a horrible disease and not knowing from one day to the next how they are going to cope, but yet still having and keeping the will to survive,” continues Munroe.

“This was a great cause, and I was more than happy to be a part of it,” said Dean Sternberg. “Frank did a fantastic job writing the music, and it was an honor to be on a track with Ronny and the rest of the talent involved, from the musicians to our Engineer Aaron Smith. We wish J Von and Ronny all the strength and light in the world in their fight against an awful disease.”

“I have been honored to play with Beltfed Weapon,” states Daryl Williams “not only because of the amazing talent involved but because of the quality of people involved. To be apart of this song and new album has been an amazing experience thus far and with ‘P.O.W.‘ now being apart of a noble cause to help yet another victim of cancer, I feel humbled and gracious as well. Thank you Frank, Ronny, Dean, Aaron, Andy, Adon for making this happen and letting me help. Blessings to Ronny and J. Von Munroe who refuse to be victims but warriors for the fight against cancer.”

“This song ‘P.O.W.’ is personal to me and the cause is nothing but 100% positive in every way, ” said Hetzel. “I’d like to dedicate this to my very good friends who have been battling cancer. All the proceeds of every download will be going to Ronny and J Von!!”

Ronny Munroe said, “I dedicate this song to my baby J and to her endless strength and will to survive cancer. I love you baby!”